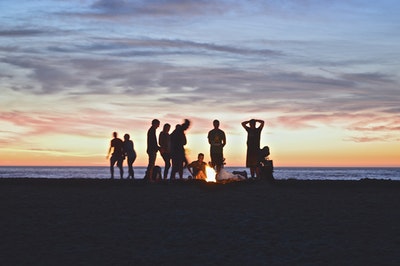 Since it’s a bank holiday here I’ve been drinking a bit more than usual over the weekend.

This couldn’t have explained the level of fear I awoke with this morning though.

I’ve realised for a few years that rather than being a relaxant, alcohol only seems to intensify anxiety in the long run.

This morning I woke at 3am with a real sense of dread. I’ve experienced this before to a lesser degree, but this time it was intensified by the sweltering heat and the insomnia that was tied to it.

I watched the minutes pass on my clock ever so slowly but the fear made time stall.

Either my basal ganglia was shot and fucked by the half bottle of Whiskey on the previous evening, or by my insistence on playing ‘Private Idaho’ by the B-52s on repeat for about 7 hours.

It was fucking horrible just waiting there with nothing to do but hoping it would pass and I could just relax a little.

Thankfully the sun came up around 4am and the dread disappeared with the darkness.

I had a nightmare in which Kate Pierson died and was replaced on keyboards by an ostrich that Schneider had trained to screech and press the right keys on the organ in the right order.

I was quite upset at the time, but now that I’ve had time to think on it more bands should try replacing integral members with birds.

Brandon Flowers could be replaced cheaply and effectively with a Congolese Peacock and no-one would bat a fucking eyelid.

Whenever I’ve had a hard night I seem to run so much better in the next morning. Everything seems more real, vital and it’s as if I think that my next run could be my last run.

I also try to tire myself out on the next run so that I don’t wake up at 2am with the dread again.

If I put 110% into the run, then I’ll be able to have some rest and not have to worry about living out the weird shit in my head as reality.

I wish I could run 25 miles on a whim, tire myself out and not have to contend with any of the bullshit.

So I went out with ‘Private Idaho’ ringing in my head and managed to successfully run the course I’d planned on running this time last week.

I didn’t bother checking my pace at any point in the run, I was more interested in staying in control of my breathing and drinking from my bottle regularly.

I started panicing a little on the hill for a short period as I was worried I was losing control. So I slowed right down and focused 100% of my concentration on my breathing.

It turned out to be one of my best and most enjoyable runs this year and my mindset is so much better compared to this morning.

Now if only I could stop listening to the B-52’s….